Tidy evaluation is a framework for controlling how expressions and variables in your code are evaluated by tidyverse functions. This framework, housed in the rlang package, is a powerful tool for writing more efficient and elegant code. In particular, you’ll find it useful for passing variable names as inputs to functions that use tidyverse packages like dplyr and ggplot2.

The goal of this post is to offer accessible examples and intuition for putting tidy evaluation to work in your own code. Because of this I will keep conceptual explanations brief, but for more comprehensive documentation you can refer to dplyr’s website, rlang’s website, the ‘Tidy Evaluation’ book by Lionel Henry and Hadley Wickham, and the Metaprogramming Section of the ‘Advanced R’ book by Hadley Wickham.

To begin, let’s consider a simple example of calculating summary statistics with the mtcars dataset. Below we calculate maximum and minimum horsepower (hp) by the number of cylinders (cyl) using the group_by and summarize functions from dplyr.

Now let’s say we wanted to repeat this calculation multiple times while changing which variable we group by. A brute force method to accomplish this would be to copy and paste our code as many times as necessary and modify the group by variable in each iteration. However, this is inefficient especially if our code gets more complicated, requires many iterations, or requires further development.

This is the kind of headache that tidy evaluation can help you solve. In the example below we use the quo function and the “bang-bang” !! operator to set “vs” (engine type, 0 = automatic, 1 = manual) as our group by variable. The “quo” function allows us to store the variable name in our “groupby_var” variable and “!!” extracts the stored variable name.

The code above provides a method for setting the group by variable by modifying the input to the “quo” function when we define “groupby_var”. This can be useful, particularly if we intend to reference the group by variable multiple times. However, if we want to use code like this repeatedly in a script then we should consider packaging it into a function. This is what we will do next.

To use tidy evaluation in a function, we will still use the “!!” operator as we did above, but instead of “quo” we will use the enquo function. Our new function below takes the group by variable and the measurement variable as inputs so that we can now calculate maximum and minimum values of any variable we want. Also note two new features I have introduced in this function:

Below we define our function and use it to group by “am” (transmission type, 0 = automatic, 1 = manual) and calculate summary statistics with the “hp” (horsepower) variable.

We now have a flexible function that contains a dplyr workflow. You can experiment with modifying this function for your own purposes. Additionally, as you might suspect, you could use the same tidy evaluation functions we just used with tidyverse packages other than dplyr.

As an example, below I’ve defined a function that builds a scatter plot with ggplot2. The function takes a dataset and two variable names as inputs. You will notice that the dataset argument “df” needs no tidy evaluation. The as_label function is used to extract our variable names as strings to create a plot title with the “ggtitle” function. 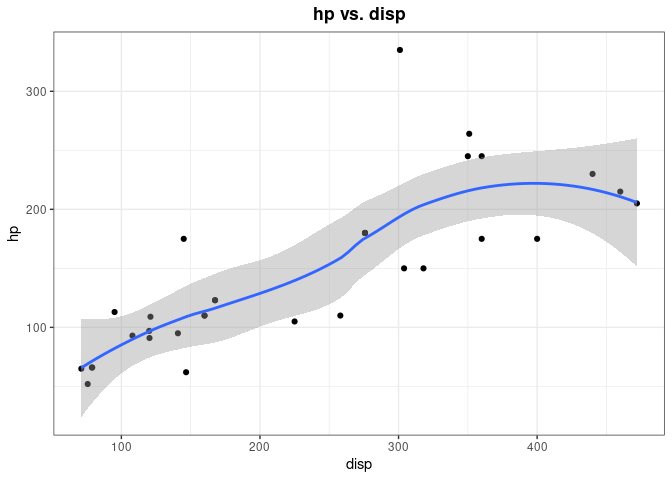 As you can see, we’ve plotted the “hp” (horsepower) variable against “disp” (displacement) and added a regression line. Now, instead of copying and pasting ggplot code to create the same plot with different datasets and variables, we can just call our function.

To wrap things up, I’ll cover a few additional tricks and shortcuts for your tidy evaluation toolbox.

This concludes my introduction to tidy evaluation. Hopefully this serves as a useful starting point for using these concepts in your own code.